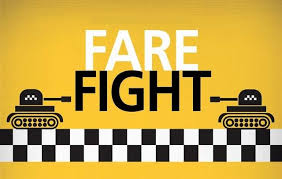 One thing that often shocks people who don’t see a lot of medical records is how quickly medical bills add up in car accident cases. Things like emergency room visits and diagnostic imaging scans are typically well over a thousand dollars. Even relatively routine ambulance rides, where the patient is not at risk of dying or suffering some permanent catastrophe, can be in that ballpark, too. And, despite the Affordable Care Act, doctor bills are still typically very high, sometimes mind bogglingly so. In Oregon, trial testimony fees by specialist M.D.s, for instance, can be as high as $4,000 an hour.

This is one of the reasons we often tell people that buying more insurance coverage is almost always a good idea.

Well, it turns out that all this might be a pretty big new problem with the growing use of commercial ride-sharing services like Uber and Lyft.

According to BuzzFeed News:

Uber is steering drivers to purchase auto insurance that leaves them uncovered when they’re trolling for fares and that often forces them to flout the law by lying when they register their automobiles, according to documents, interviews, and an Uber presentation attended by a BuzzFeed News reporter.

Apparently, at both Uber and Lyft, even when the services’ between-rides coverage does apply, the policy limits (the maximum amount an insurer has to pay out for any one claim) for these drivers trying to find customers is only $50,000. If you were injured by one of these “trolling” ride-share drivers, your medical damages could easily run way past that amount of insurance, forcing you back onto your own under-insured motorist coverage. Worse, you could be injured by an uninsured ride-sharing driver!

One answer to it all would be for legislatures to require Uber or its drivers to carry commercial automotive liability insurance. In most states, anybody who uses a vehicle to make money is already supposed to carry such coverage. But enforcement of this requirement is extremely difficult for state DMVs.

And, according Buzzfeed News’s report, there’s a reason the services don’t just comply and provide or require commercial insurance for drivers:

The high cost of commercial insurance creates a dilemma for Uber, which has been aggressively recruiting UberX drivers in order to flood markets with thousands of drivers and win market share from competitors. Simply put, advising drivers to purchase commercial insurance could lead many of them to decide against working for Uber in the first place.

So, from the perspective of Oregon personal injury law, whether you are a ride-sharing driver or simply somebody walking, cycling, or operating your own car around them, things aren’t as quite simple as they seem in much of the adoring press coverage.