Clackamas County is home to about 10 percent of Oregon’s 3.9 million people. According to this news analysis of data from the Oregon Department of Transportation, 11 of the 60 most dangerous traffic intersections in Oregon are in Clackamas County. That’s 18 percent, almost double the county’s population share. So, Clackamas County is a place where your risk of being injured in a car crash is significantly higher than normal.

Part of this heightened risk is due to the fact that, despite the very real dangers of traveling on Oregon’s rural roads, research shows that urban and suburban arterial streets are clearly the most dangerous places to be a driver or passenger in an automobile. Metro, the regional agency that coordinates infrastructures across the Portland metropolitan area‘s three main counties, did a study of dangerous Oregon streets in 2012. Metro found that major urban and suburban roadways “have far higher fatality rates than neighborhood streets or even freeways.” 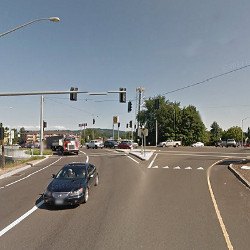 That would be the intersection of Highway 212 and Interstate 205, in Johnson City. According to ODOT, in 2013, there were 98 car crashes at that place. These collisions injured 57 people and killed 1 person. That made the Highway 212/I 205 interchanges the fourth most dangerous road locale in Oregon.

The three most dangerous Oregon streets, by the way, are all in Portland, where Dawson Law Group also maintains an office very close to the Multnomah County Courthouse.

According to Metro’s research, traffic crashes cost a billion dollars a year across the Portland metro area. For more information, check out our webpage on the special dangers of automobiles. And if you were hurt in an auto accident in Clackamas County or any other place in Oregon, call us today at 503-656-0400. We will get you rolling on the road to justice.